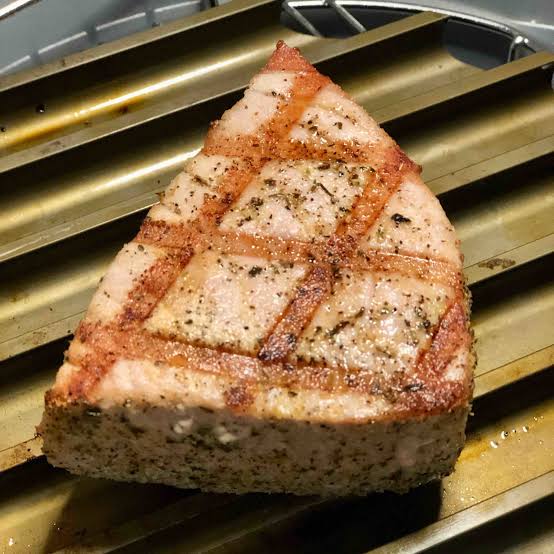 You don’t need any special skills to make these juicy and tender air fryer tuna steaks.

Serve with a dipping sauce that complements the fish well.

Any fish fan will appreciate these air-fried tuna steaks; you can make them rare, medium-rare, medium, or even well-done by following the advice and recipe in this post.

WHY YOU WILL LOVE THIS RECIPE?

WHAT IS AHI TUNA?

To begin, tuna is a huge, muscular fish with flesh that varies in color from pink to a darker red.

Yellowfin tuna, also known as ahi tuna, is a smaller tuna that is frequently used in raw fish dishes in Asian cuisines such as sushi.

One of the most frequent species of tuna used for canning is ahi tuna, often known as yellowfin tuna.

It can also be grilled or seared, as this recipe for seared ahi tuna in the air fryer shows.

Ahi tuna is a healthy seafood to eat. This fish is low in fat but high in proteins and other elements that are beneficial to your overall health.

Nevertheless, it has more mercury than other varieties of tuna, so you should limit your consumption to 1-3 times per month and avoid it if you are pregnant.

IS AHI TUNA HEALTHIER THAN SALMON?

In terms of nutrition, the two fish are fairly similar and each are nutritious in their own ways.

Yellowfin tuna steaks have less fat and 8 more grams of protein every 4 12 ounces than salmon.

Salmon, on the other hand, has more omega-3 fatty acids than other fish. You’re still making a healthy choice no matter which air fryer fish you choose.

HOW TO SEASON TUNA STEAKS?

Using olive oil, salt, and pepper, season the raw tuna steaks. For added flavor, herbs such as cilantro, dill, mint, and green onions can be added.

To make ahi tuna in the air fryer, all you need is olive oil, salt, and pepper, and the dipping sauce will add a little extra flavor.

CAN I MAKE THIS RECIPE WITHOUT MARINATING THE TUNA?

Yes! We’ve all been in that situation. You buy all of the ingredients for supper, then rush to prepare it, only to discover that it requires marinating, which you don’t have time for.

This recipe may be made without marinating and still have that ginger-soy flavor.

Cooking yellowfin tuna in an air fryer isn’t intimidating. It’s simple to season the fish with salt and pepper before searing it in the air fryer.

HOW LONG TO COOK TUNA STEAKS IN THE AIR FRYER?

Ahi tuna is a low-fat fish that is cooked to a medium-rare temperature of 125 degrees Fahrenheit to retain moisture. These cooking durations and donenesses are suitable for both frozen and fresh tuna steaks.

HOW TO COOK FROZEN TUNA STEAKS IN THE AIR FRYER?

In the air fryer basket, place the seasoned frozen tuna steaks and air fry for 7-10 minutes, flipping halfway through or until desired doneness is reached.

HOW TO THAW FROZEN TUNA STEAKS?

Here are a few of the best ways to defrost frozen yellowfin tuna.

CAN YOU REHEAT TUNA STEAKS?

Tuna steaks that have been left over might easily be overdone. In the air fryer, there’s a narrow line between reheating and overcooking yellowfin tuna steaks.

If you’re reheating it in the air fryer, set it to a lower temperature and check it every 30 seconds until it’s fully heated.

Is it better to grill or fry tuna steaks?

Fresh tuna meat keeps together effectively in a grill pan, making it ideal for grilling. Fresh tuna is sturdy and bright red. In a grill pan, medium-thickness tuna steaks can be cooked in as little as 4 minutes. Unlike the drier canned tuna, tuna steak

Can I cook tuna steaks from frozen?

Remove all packing before cooking in the oven from frozen. To make a parcel, wrap tuna steaks in lightly greased foil. After defrosting, cook as soon as feasible. Do not re-freeze once defrosted.

Why is my frozen tuna brown?

Tuna, whether fresh or conventionally frozen and thawed, quickly becomes an unappealing brown (or chocolate, as it is known in the business). The gas carbon monoxide, which is also found in wood smoke, keeps the flesh from discoloring.

Any fish lover will love seared tuna steaks in the air fryer; you can make them rare, medium-rare, medium, or even well-done by following the tips and recipe in this post.

FOR THE DIPPING SAUCE

The blog post above contains instructions for making frozen tuna steaks in the air fryer.

Using hot water or thawing ahi tuna on the counter can cause bacteria to grow on the fish’s surface. 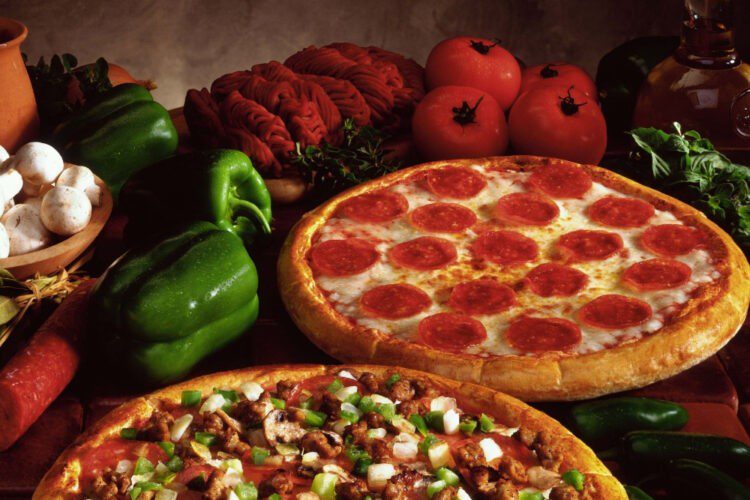 ★★★★★ 5 from 1 reviews The first frozen pizza was introduced to the world in the 1950s, and it is the best type of nourishment for people who don’t have access to an oven, microwave, or don’t want to eat takeout. And, as said above, we will witness almost everything about Costco, a one-of-a-kind frozen pizza… 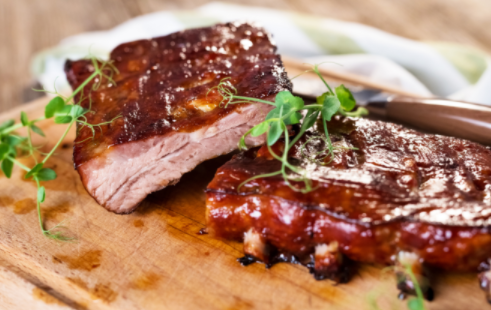 ★★★★★ 4.5 from 2 reviews Costco ribs can be cooked in the oven, on the Traeger, or on the barbecue, and will take between 2 and 3 hours to get excellent, delicious, and hot ribs with easy flesh removal from the bones. Pre-seasoned ribs from Costco are ideal for a weekend barbacoa celebration. So keep reading… 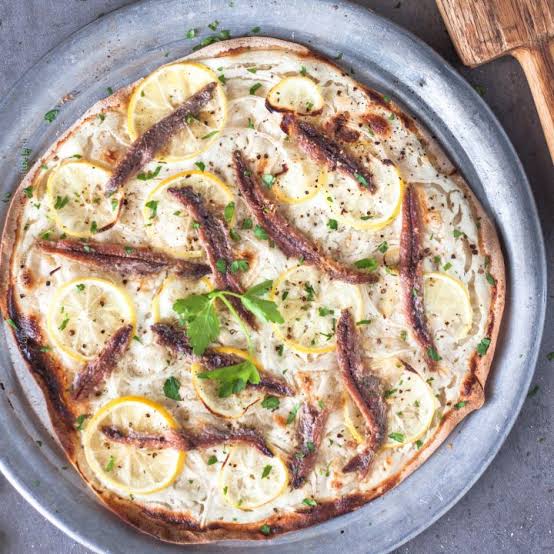 ★★★★★ 5 from 1 reviews Do anchovies go well with pizza? Anchovy pizza is one of the most popular Italian pizza recipes, and it has an incredible flavor. You can use your favorite pizza dough or this simple 1-bowl recipe, which requires no kneading or a stand-mixer. The crunchy pizza crust topped with tomato sauce, creamy… 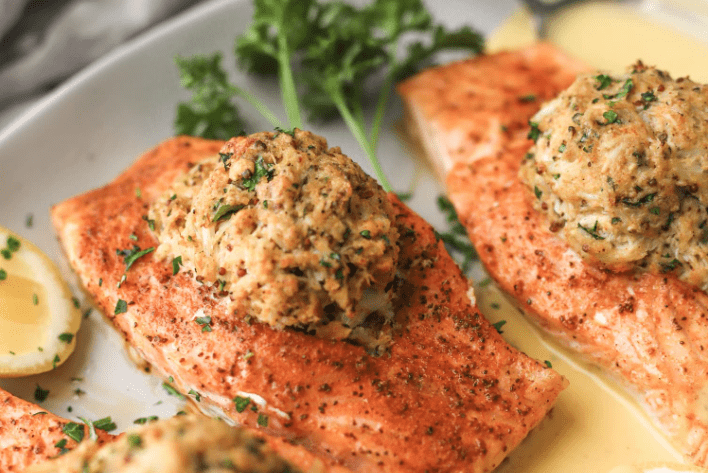 ★★★★★ 5 from 1 reviews Look for an Easy 15 Minutes Crab Stuffed Salmon? Salmon fillets are cooked until tender and then stuffed with crab meat and a creamy mixture for an elegant Crab Stuffed Salmon dinner. The salmon is perfectly prepared, with a crunchy Panko coating and a creamy, delicious stuffing, as one could expect… 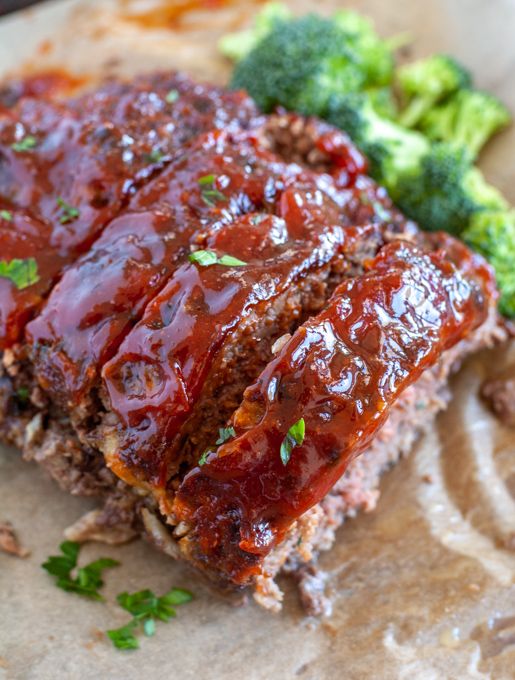 Meatloaf cooked in the air fryer is a family-friendly dish that will quickly become a staple on your weekly menu. On the outside, it has a fantastic crust, and the inside is deliciously moist. All of this is topped with a mouthwatering sauce. If you’ve never made meatloaf in the air fryer, get ready for… 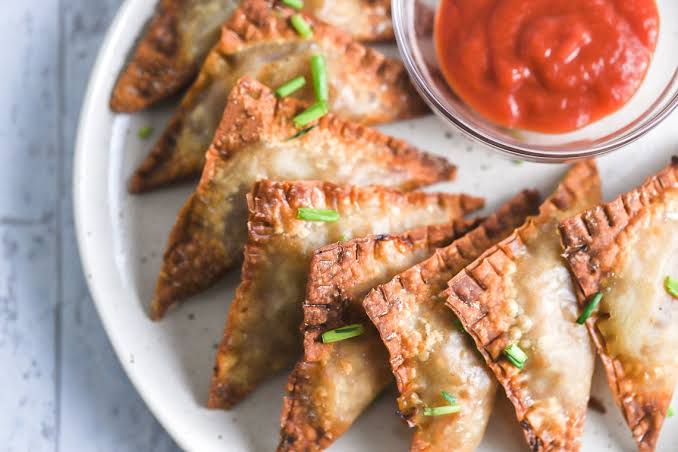 Air fryers provide versatility that many other appliances do not. You can roast vegetables, cook chicken, hard boil eggs, and even cook frozen foods, such as these Air Fryer Dumplings. I’ve tried pan steaming dumplings and gyoza, but they don’t come out as crispy as I’d like. Air frying frozen dumplings crisps them up while…